Go to CSLewisMovie.com for a theater near you

Fellowship for Performing Arts’ first film, The Most Reluctant Convert, premieres in hundreds of movie theaters nationwide on Nov. 3. This opportunity for nationwide distribution is possible as a result of the success of FPA’s national theatrical tours.

Theatre owners will monitor advance ticket sales and add shows and dates according to demand.

“FPA is excited to be working with Aspiration Entertainment and Trafalgar Releasing to bridge our transition from producing only live theatre to films as well,” said Max McLean, FPA’s founder and artistic director. “And this is the right story to introduce the work of FPA to the movie industry.”

The Most Reluctant Convert was shot last fall in 17 magnificently cinematic locations in and around Oxford where many of the actual events of C.S. Lewis’ life took place. The cast of 15 actors includes Max as the elder Lewis looking back on his conversion journey from vigorous debunker to the moment he finally “gave in, knelt and prayed, and became perhaps the most…reluctant convert in all England.”

The main cast of 15 was supported by 190 extras wearing 290 costumes to cover the events from Lewis’ childhood and teen years to the trenches of World War I, to his life at Oxford. The story explores the influence of friends like J.R.R. Tolkien and Owen Barfield on Lewis’ conversion.

In addition to Max, rising U.K. star Nicholas Ralph portrays Lewis as a young man. He’s the star of the current PBS’ Masterpiece hit All Creatures Great and Small. The film also introduces Eddie Ray Martin as the boy Lewis.

Max McLean portrays and older C.S. Lewis looking back on his journey from atheism to faith in FPA’s first film The Most Reluctant Convert.

The film was directed by double Emmy- and two-time BAFTA-winning director Norman Stone, who also wrote the screenplay based on Max’s stage play of the same name. Norman is a strong Christian and a huge

Lewis fan who has produced and directed several other Lewis projects including Beyond Narnia and Shadowlands for the BBC.

Tickets are set to go on sale in September and CSLewisMovie.com will have the latest information. Great group rates will be available.

“Under stringent precautions, the Lord provided a six-week window last fall for us to make a great film about a great man at a time when most things were shut down,” Max said. “Now I am thrilled that the entire FPA family can finally see it on a big screen near you. And with film, thousands more people will be able to see it in locations we would not have been able to reach before.”

Thankfully, our Fellowship Circle of donors were enthusiastically supportive. We couldn’t have made this movie without them. And because of them and the success of the November release, FPA’s future will not only create art from a Christian worldview for the stage but also for the screen. 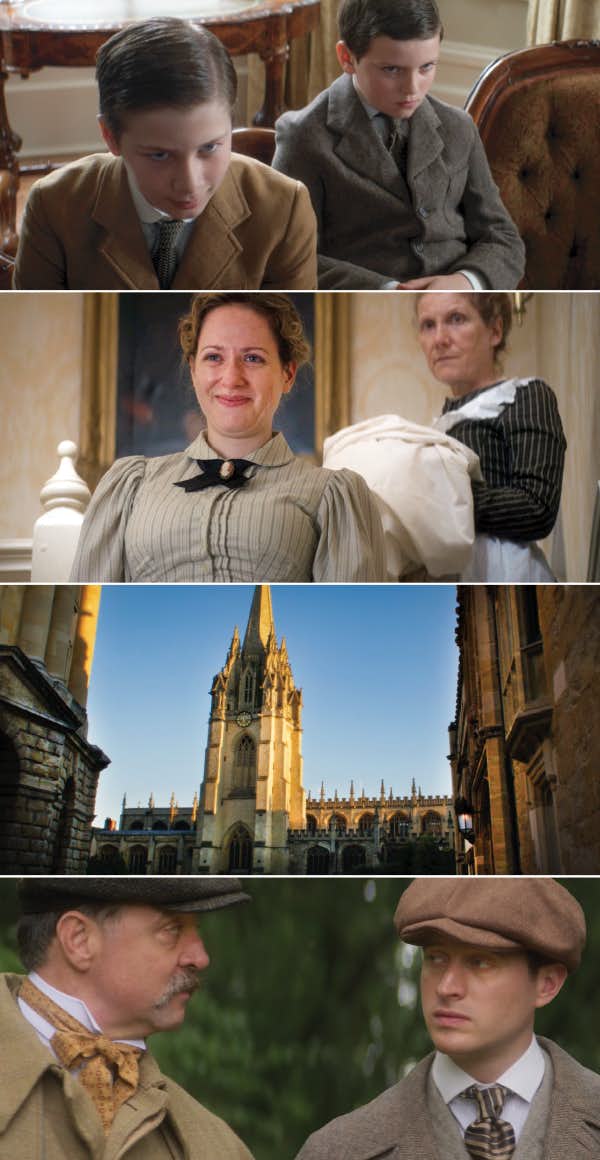 The Most Reluctant Convert introduces Eddie Ray Martin (top, right) as a boyhood C.S. Lewis. Amy Alexander (2nd above, left) brings Lewis’ mother, Flora, to life on screen. The film was shot in and around Oxford where Lewis studied, lived and taught (3rd above). Nicholas Ralph (bottom, right) plays Lewis as a young man, here in conversation with his father, Albert (Richard Harrington).