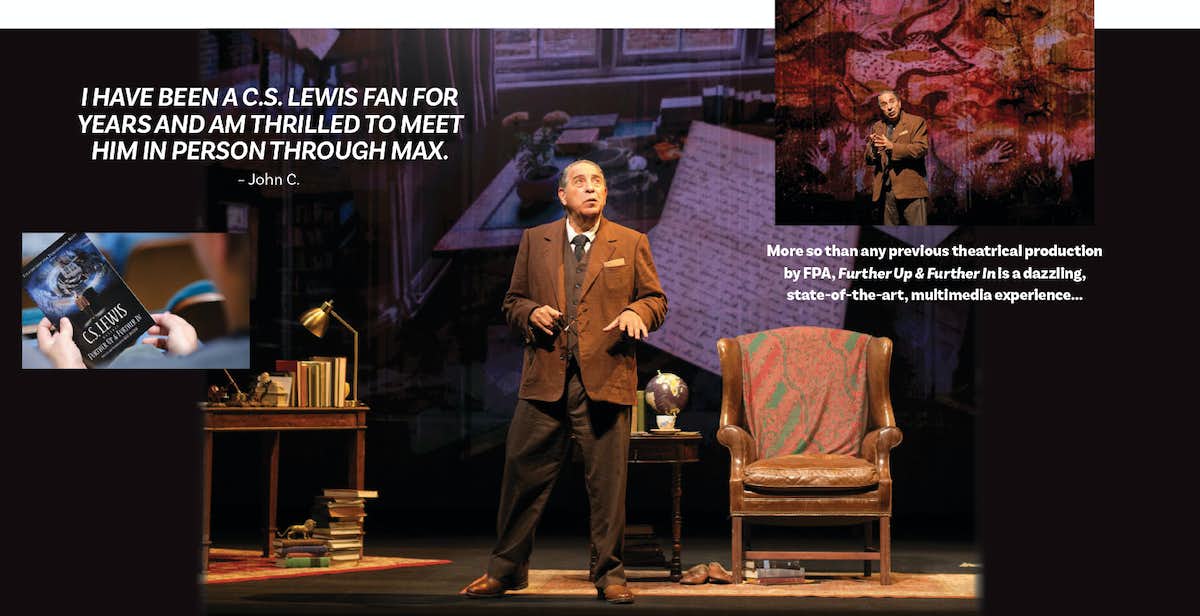 This fall marked the launch of Fellowship for Performing Arts’ newest play, C.S. Lewis On Stage: Further Up & Further In.

Featuring FPA Founder and Artistic Director Max McLean, Further Up & Further In continues the remarkable spiritual journey of one of the most beloved and admired Christian writers of the past 100 years.

FPA and Max brought Lewis’ conversion story to life on stage and screen in The Most Reluctant Convert, ending in 1931 when Lewis – a new follower of Jesus – was just 32 years old.

“At that point, no one knew what Lewis’ faith would mean to him or others,” Max said. “In Further Up & Further In, we explore why the BBC gave Lewis a national audience to deliver unprecedently popular radio talks that would become Mere Christianity. How Hitler’s devious charm influenced the writing of The Screwtape Letters. What made Lewis such an effective apologist/evangelist to skeptics. Was it prayer? His expectation of the second coming? Or was it his deep longing for Heaven that also inspired much of his writing including Narnia and The Great Divorce?”

More so than any previous theatrical production by FPA, Further Up & Further In is a dazzling, state-of-the-art, multimedia experience with Harry Feiner’s stunning projection designs exploding on to a stage-wide LED screen that forms the backdrop to the set of Lewis’ study.

Max started working on the script in the fall of 2019. After rehearsals in New York last winter, developmental productions were held in Houston and Phoenix last spring. The show began its first national tour in September in Greenville, South Carolina, followed by Tampa and Fort Pierce/Vero Beach, Florida, before its world premiere in Dallas. Other cities include Atlanta, Charlotte, Cincinnati, Orlando and Fort Lauderdale, with more to come. All of this took place as Max continued performing C.S. Lewis On Stage: The Most Reluctant Convert on university campuses across the country; The Great Divorce completed its COVID-interrupted national tour; and FPA continued promoting The Most Reluctant Convert film, first in theaters and now on Amazon Prime, Apple TV, Google Play and YouTube, as well as showings at colleges and churches around the country.

“What a blessing it is for FPA to emerge from the COVID shutdown as strong and robust as we have ever been,” Max said. “The impact we are able to have is directly related to the support of our Fellowship Circle of donors. And, as you’ll see in this newsletter, we have so many more opportunities before us.” 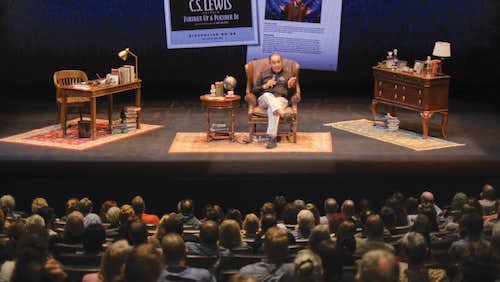 Max McLean fields audience questions following a sold-out performance of Further Up & Further In in Greenville. Routinely, 85 percent of attendees stayed for the Q&A!