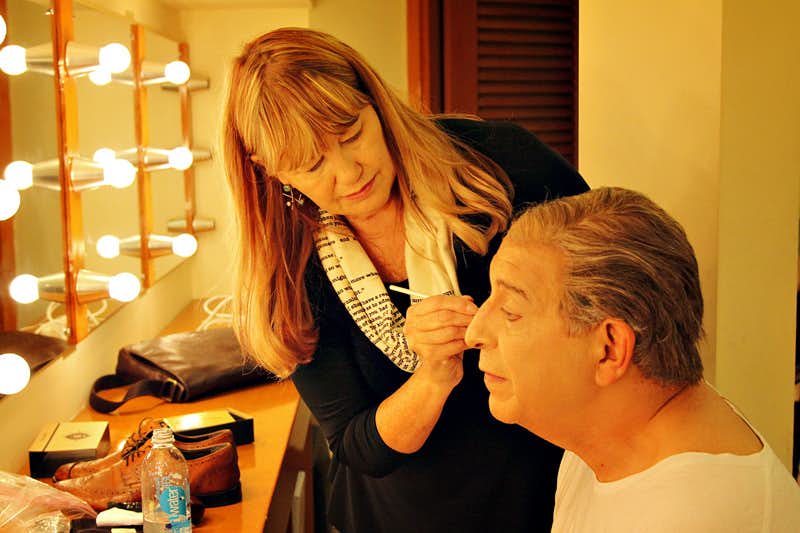 Max McLean prepares to take the stage as C.S. Lewis in The Most Reluctant Convert. A sequel to the play, C.S. Lewis on Stage Further Up. Further In. premieres in 2022.

There is no debate as to the enormous impact C.S. Lewis has had on millions of people around the world.

This is the main reason Fellowship for Performing Arts is so attracted to converting his work from the page to the stage and now to the screen.

The early years of his life inspired FPA’s nationwide hit play and now film The Most Reluctant Convert.

It became evident to FPA Founder and Artistic Director Max McLean that Lewis’ life is too big for just one play or one film. So, this spring, FPA will launch the sequel to The Most Reluctant Convert – C.S. Lewis on Stage: Further Up. Further In. The title comes from the final Narnia story, where heaven is seen as a magnificent eternal mountain that joyously beckons you with an intense desire to go “further up, further in.”

“Convert begins Lewis’ long journey from hell-bent atheist to admitting that God is God, kneeling and praying, perhaps the most reluctant convert in all England.  This begins the story,” said Max.  “At that time, it wasn’t obvious what God had in mind for him.  How did this little-known, 32-year-old scholar in medieval literature become the most influential Christian writer of the 20th century?

“It wasn’t until the Holy Spirit entered him that he found his voice,” Max continued. “The literary flow that emerged from his pen from that moment was immense. And it did not cease until the day he died.”

Soon after Lewis published his first academic book – The Allegory of Love – it put him on the map as one of the world’s greatest literary historians. It is still used in English and medieval studies departments around the globe.

Then he published a little book called The Problem of Pain. That book had six printings in its first year! It caught the attention of the BBC, which invited him to give radio talks on Christianity.  They told him that they didn’t want a clergyman or “another religious jaw” but a fresh new voice.

This was during the blitz where there were days that hundreds of German planes flew over Britain bombing almost anything in site. As Lewis mused, “When bombs destroy our homes, talk of Armageddon no longer seems fanciful.”

He soon became one of the most recognized voices in all England. Then, after hearing Hitler give a speech on the radio, he started a series of fictional correspondence from one devil to another called The Screwtape Letters. This introduced him to America.

In that period, he, also, penned Out of the Silent Planet, Perelandra, That Hideous Strength, The Abolition of Man, The Great Divorce let alone hundreds of papers and essays plus his massive Oxford History of Literature in the 16th Century and his exquisite Preface to Paradise Lost.

“Lewis read everything from the Greeks to the Moderns,” Max said. “He had a steel-trap mind that could remember everything he read and then translate it into magnificent prose and speech. And he did it all from a Christian perspective. Many were drawn to his work and became a kind of literary evangelist although he downplayed his abilities in that regard.”

“I do suffer from an incurable intellectualism,” he wrote. “Of course, the direct evangelical appeal ‘come to Jesus’ is still remarkably effective. I’ve seen it done. I can’t do it. But those who can ought to do it with all their might.”

Contrary to Lewis’ self-assessment, he was an effective evangelist as men like Chuck Colson and Francis Collins can attest. They and many others have testified in print to the vast influence Lewis had on their coming to Christ.

“It is my hope that both The Most Reluctant Convert and our new play Further Up. Further In. will continue that evangelistic influence into the future,” Max said.

C.S. Lewis on Stage: Further Up. Further In. will be developed in February and March and begin touring in April 2022. Look for more information on the website or in the next Fellowship Circle newsletter as it is FPA’s Fellowship Circle of supporters who make this production possible.

FPA’s Campus Initiative Is Back in Session! Read More

From the Desk of Max Mclean Read More