Max meets with students at The Ohio State University, where 1,300 people attended.

On a crisp Monday night in September, outside The Ohio State University’s Mershon Auditorium, a line of students two blocks long waited for the house to open as Fellowship for Performing Arts presented C.S. Lewis On Stage: The Most Reluctant Convert. 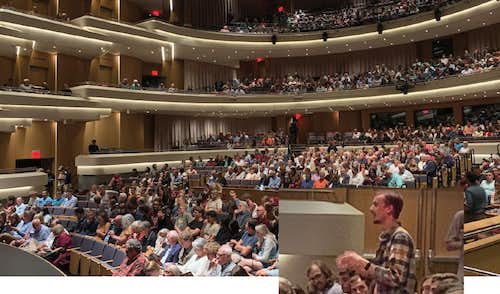 A sold-out crowd of 1,200 – including 500 students – on the Virginia Tech campus.
A Virginia Tech student asks Max a question after the show.

“It would just be 10 days later that we launched the follow-on production about Lewis’ spiritual journey (see story page 2),” said FPA Founder and Artistic Director Max McLean, who stars as Lewis. “It’s so gratifying that The Most Reluctant Convert continues to draw such interest on campuses nationwide.”

FPA’s Campus Initiative brought 400 students, faculty and staff and many more people from the Columbus community. All told, 1,300 people attended the event.

“I was simply amazed how many students knew who Lewis was,” said Ratio Christi Director Eric Chabot. “Our poster was a magnet, and I had people walking up to me every day asking me about the event. Some of them had been reading his books or had read his books. It’s a testimony to his legacy.”

That scene repeated  exactly one week later as over 1,200 people – 500 of them students – packed a sold-out Fife Theater on the Virginia Tech campus in Blacksburg, Virginia. 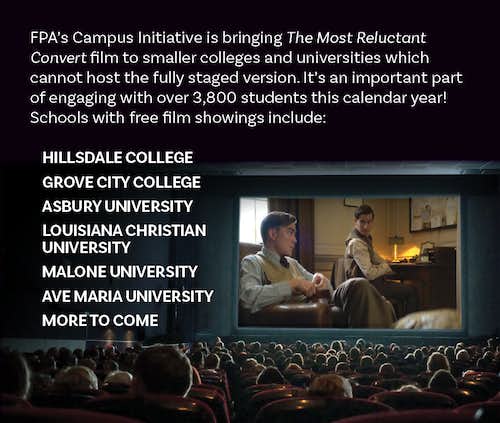 “The Campus Initiative is coming back strong after COVID made it nearly impossible to schedule productions,” said Courtney Menking, University Tour Manager. “Now, we’re really moving ahead with University of Michigan and University of Florida preceding these performances, University of Kentucky set for early next year and, hopefully, more to come.”

“Over 16 Million Trailer Views to Date!”

The Campus Initiative is a special ministry of FPA where grants underwrite $5 tickets for students. This is only possible through the generosity of our Fellowship Circle of supporters. If you would like to help bring the play or film to your alma mater, contact Courtney Menking at [email protected]